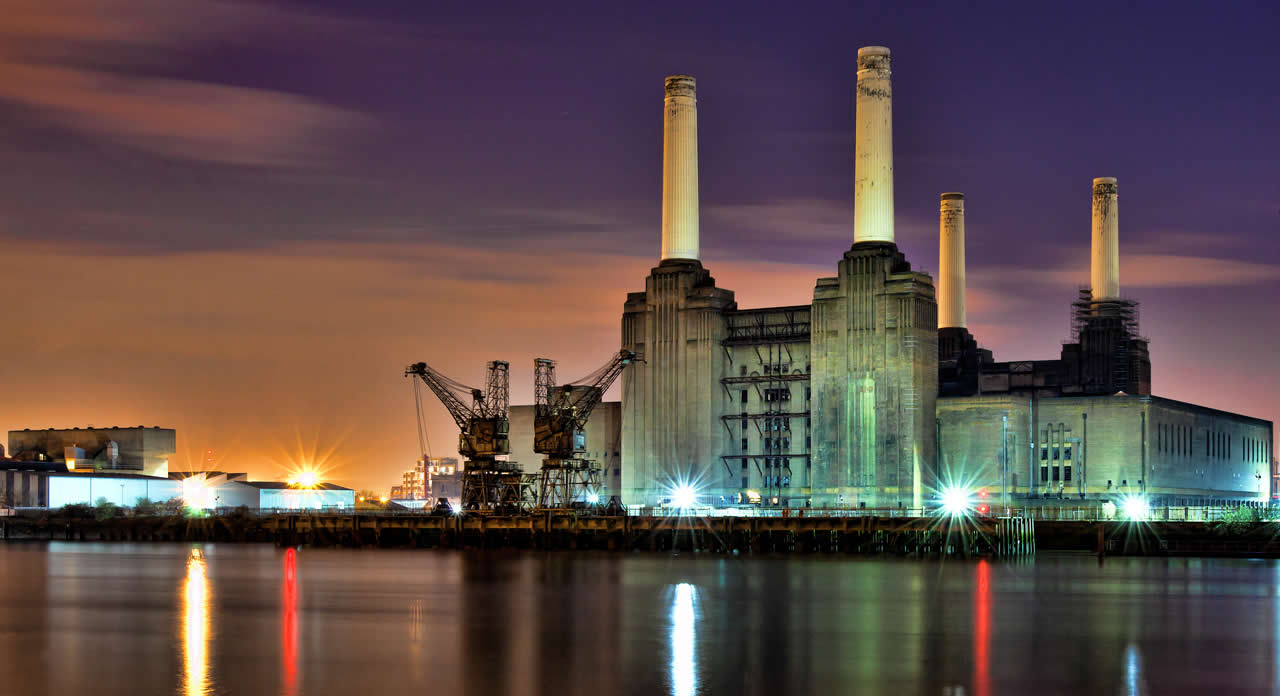 As we’re based in Battersea, it seemed appropriate to write our initial post about the iconic behemoth that dominates our local skyline – Battersea Power Station.

At the time of building, Battersea Power Station was a feat of construction and engineering. Since the original build’s approval in 1927, it has gone from an idea widely regarded as controversial and disdainful, to one of South London’s most recognisable and most loved landmarks. Having served London with electricity for over 50 years, it was retired from service in 1985. For many of the following decades, the station’s fate fluctuated within the realms of uncertainty, passing from hand-to-hand, business-to-business, concept-to-concept; never truly finding its new purpose. However, the last 5 years have seen it enter its second life.

In May 2017, the first 100 residents moved into their new accommodations, situated in what is perhaps one of the largest, most architecturally spectacular and revolutionary retail and housing developments in the country. The redevelopment of this historic construction has been a huge undertaking, but the commercial and social value of the build will ensure that the project will have been well worth the effort and that the much-loved landmark will not go to waste.

Up until the late 1920s, the business of supplying electricity was pretty inefficient. It was supplied by numerous small, local power stations, all of which were privately owned. This made for fierce competition between companies, poor station construction, low-quality service and a high cost to the consumer. There were very few regulations and no official standard set for the industry. It was this that led Parliament to push for nationalisation of the electricity industry. However, it was not until 1948 that this nationalisation came to pass.

This transition was held at bay due to the formation of the London Power Company; private owners wanted to hold on to their industry, so formed this group to hold on to their own commercial viability. They agreed to adhere to the government’s recommendation that electricity should come from fewer, bigger power stations, and proposed plans for a so-called ‘super-station’ on the South Bank of the Thames.

The proposal caused widespread uproar. It was thought that the construction would cause widespread disruption, and the amount of pollution and waste produced by the station would be a serious health risk. There was even concern that the waste would compromise the quality of local buildings and parks, as well as damaging artwork at the nearby Tate gallery.

Nevertheless, the construction of the original power station went forward. The original building kicked out 400,000KW of energy, this was expanded to over 500,000 when the power station was expanded in 1953; the extension responsible for the ‘four-chimney silhouette’ that is now so familiar. It was, and still is, the largest building in Europe to be made of brick. Since then the power station has become loved. It has remained a symbol of the electrical industry and a badge of honour for Battersea and the surrounding area ever since.

As the electricity industry advanced, new and more efficient systems of electricity production came into play; the power station ceased to generate electricity in 1983. The bastion of South London industry and marvel of construction would now be without purpose for nearly 30 years.

Many companies tried to develop the building, to preserve it or harness its commercial viability, but all seemed to be thwarted at the last minute. There were plans to turn it into a theme park in the late ’80s, but the funding fell through, halting the process mid-construction. The derelict building was laid to waste by the failed project until plans were put in place to develop it into a leisure park in 2003. This also fell through due to planning problems; the four towers were declared structurally unsound, flattening them was opposed strongly by many associated parties.

After its upgrading to Grade II listing status, there were many arguments aired against the development of listed buildings; opinions which are still very much held today. An eco-tower plan was talked about in 2009, only to be blocked by the government. Then the recession happened, and all plans were seen as commercially and financially unstable. Nothing but a long string of roadblocks and wasted opportunities.

However, the landmark was put on the open market in 2012 for the first time, was acquired by a developer, and has since undergone a spectacular renovation and recreation of purpose. In 2013 work began on the new riverside park and 800 new residences. Plans were also put in place for the extension of the Northern Line. As work on this began in 2015, new companies struck construction deals within the development; technology giant Apple planned to create a London HQ, and a deal for a £13 million medical centre was made.

In 2017, for the first time in nearly 90 years, the station’s promenade was re-opened to the public. The site has been repurposed for the age of technology and commercial appetite and is becoming a beloved monument once more.

When the power station first burst into life, it brought opportunity with it in turn. Although the concerns of the surrounding community were widespread and well known, the station managed to silence these and create a huge impact. This corner of South London was not affluent at the time, nor did it show any economic promise. The station not only supplied the local workforce with hundreds of jobs, it also put Battersea on the map. This growing interest led to the development of the area; business thrived off of the tourism and new affluence in the area. Clapham Junction station swiftly grew into one of the busiest terminals in the country, an accolade which it still holds to this day.

In its new life, the power station continues to benefit the surrounding population. The development creates a new commercial centre for the area, supplying jobs and opportunity once again. The new Northern Line branch will give a much-needed boost to the more sparse transport network south of the river, bringing in trade from the rest of London, and granting easier commuter access to those travelling from Battersea. This part of London has been ‘up and coming’ for some time now, this regeneration only serves to make it more desirable.

What Does it Take to Overhaul a Building Like This?

Getting a new building up is extremely complicated and labour intensive as it is, especially one of this magnitude. The tonnage of bricks alone, used in the construction of this power station, reached into tens of thousands, not to mention the money spent on things like heavy plant machinery and crane hire. But with redevelopment, you not only have to consider the materials involved in what goes up, you also have to consider the amount of waste material that must come down. The task of dealing with commercial waste is often overlooked and underestimated. Not only must this material come down, but it must all be transported safely and efficiently, and processed appropriately according to the individual materials involved.

In the case of the redevelopment we are not only dealing with construction materials such as brick, metal, glass, and so on. We are also dealing with earth, clay and rock; the materials displaced by drilling and underground train line construction. This takes expert knowledge and resources and must not be taken lightly.

The redevelopment of this historic London landmark is a real victory for the preservation of architectural and engineering brilliance. Follow this link to learn more about what the new Battersea Power Station has to offer.