With either full or part load prices, we're the no.1 choice for rubbish and waste removal in West London 020 7720 2777Get a quote

Full or part loads – Only pay for the rubbish we take!

If you’ve got rubbish that needs clearing in West London, why not get in touch with Metro Waste for a quick quote? We’ve been removing West London’s Junk for over 25 years so we know a thing or two about junk!

Whether you have a mountain of rubbish that needs removing or just a few items of domestic or business waste to clear, we’ll only charge you for the amount of rubbish we actually take away, so our service needn’t break the bank.

Most of us lead busy, hectic lives and often just simply don’t have the time to clear the garden ourselves. If we have time off at the weekend, we’d rather be resting and relaxing in the garden, not breaking our backs clearing up all the waste we’ve accumulated. That’s when it’s time to call in the professionals. If your West London garden is choc-a-bloc with junk, garden debris or general rubbish that you’ve been meaning to take to your local rubbish tip, but never gotten around to, contact us for a quick quote.

Our team are fast and efficient and will get the job done as quickly as possible. Metro Waste has a fleet of large tipper trucks that can hold huge amounts of garden waste, so we can usually even get the ‘big jobs’ completed in one single truck-load.

We can clear your garage, garden shed or other outbuildings such as garages and greenhouses from that everyday garden rubbish that you no longer need. We regularly collect and dispose of all types of general garden trash such:

In fact, we can pretty much clear anything and everything, except asbestos.

It doesn’t matter if you’re moving out, moving in or have been living in your West London home for a long time – you’ll undoubtedly have plenty of domestic rubbish and general junk that needs clearing at one time or another. You may have even been using your garage as a dumping ground for your household rubbish. If you’ve got a car, you can, of course, take some of it to your local waste recycling centre yourself but will one trip be enough and will your car end up smelly and dirty afterwards? Probably!

Even if you’ve recently had a new kitchen or bathroom fitted and have dumped the old one on in your front garden, we can take care of that as well; usually in one single load.

So, let Metro Waste take away the stress and strain of it all – We can get rid of it all including:

We’re not a fly-by-night outfit, and we’re not a ‘man-and-van’ operation – We’re a professional company that has been in business for over a quarter of a century. We have a fleet of distinctive large-capacity green tipper trucks that can hold up to 3 tonnes of your waste, which is equivalent to a 14-yard skip. 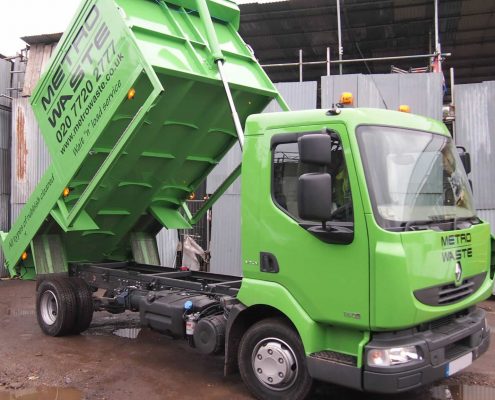 Our large capacity rubbish removal trucks can hold up to 3 tonnes of your unwanted waste.

What Areas of West London does Metro Waste Cover?

We cover all of West London but specialise in the following areas:

Is Our West London Rubbish Removal Not For You?

There are times when hiring Metro Waste’s tipper trucks to clear your unwanted rubbish in West London just isn’t suitable. If that’s the case, why not use our Skip Hire service instead?